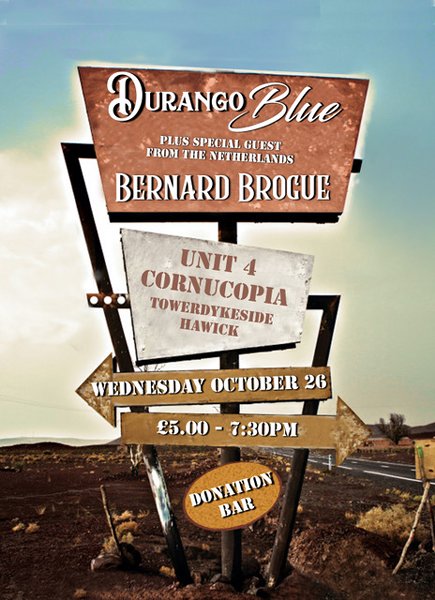 We are delighted to welcome singer-songwriter Ryan Hooper and multi-instrumentalist Paul Templeman of Durango Blue to a live performance at Unit Four.

Durango Blue perform original Blues, Roots and Americana compositions. Strong on raw emotion and sensuality Ryan Hooper is a unique and powerful voice in contemporary songwriting. In service to the song, Paul Templeman brings his distinctive style to this original material.

Netherlands-based Bernard Brogue is a singer-songwriter, who has been compared to of John Martyn, Nick Drake and Bruce Cockburn, His music could best be described as a marriage of folk, pop and jazz. He has released 3 albums “Escape The Day” (2006) “Trick Of Light” (2013) and in 2017 “Laif O Laif” written in the Groningse dialect. Bernard tours both solo and with his band in the Netherlands and performs regularly in the UK and throughout Europe.

“Bernard offered the audience a very special evening. The music doesn’t fit in a pigeonhole. He himself describes his style as Celtic Jazz – exciting and always worth listening to” (Culucu, Kleve)