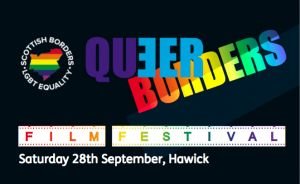 Scottish Borders LGBT Equality In partnership with Live Borders, Behind the Curtain and Unit Four present:
Queer Borders Film Festival
Celebrating the lives, loves, struggles and achievements of LGBT people here and around the world.

7pm: The Adventures of Priscilla, Queen of the Dessert
Stephan Elliott | 1994 | Australia | 1hr 44 min | Cert. 15. 25th anniversary screening!
The plot follows two drag queens played by Hugo Weaving and Guy Pearce and a transgender woman, played by Terence Stamp, as they journey across the Australian Outback from Sydney to Alice Springs in a tour bus that they have named ‘Priscilla’.
Tickets £5, book online.

Landline
Matt Houghton | 2017 | UK | 12 mins
A short documentary about the UK’s only helpline for gay farmers will be screened before Priscilla. Introduced by Behind the Curtain and Scottish Borders LGBT Equality we will be joined by filmmaker Rupert Williams for audience Q&A following the short and before the feature film.

Lasting Marks
Charlie Lyne | 2018 | UK | 14 min
In this formally minimal documentary we hear direct from some of the 16 men who were put on trial for sadomasochism under Thatcher’s rule.

These Are My Hands
Evi Tsiligaridou | 2018 | UK | 8 min
Written and performed by playwright Jo Clifford, a short documentary film-poem revealing the body as a site of personal history and experience.
NOTE: Jo and Evi will join us for Q&A.

Nirvana
Jess Kohl | 2018 | UK, India | 15 min
A beautiful and tender documentary about the Koovagum festival in the village of Villipurgam in Southern India, where each year the largest gathering of trans women in Asia takes place.

Invisible Women
Alice Smith | 2018 | UK | 30 min
In danger of being forgotten, the story of Luchia Fitzgerald and Angela Cooper is centred in this documentary that reveals how their activism advanced the fight for women’s equality and LGBT rights in the UK.

Anemone
Amrou Al-Kadhi | 2018 | UK | 18 min
A second-generation teenager channels the magic of marine life to express their non-binary identity to their religious family.