Reality and Unreality in Fiction Writing – a talk by Oliver Eade 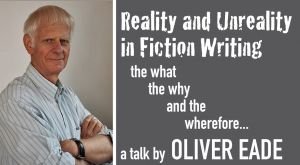 Retired Borders General Hospital doctor OLIVER EADE has published thirteen novels, two collections of short stories, and written twelve plays, four of which have been staged. His debut children’s novel, Moon Rabbit, was a winner of the 2008 Writers’ & artists Yearbook new novel Competition, and his debut adult novel A Single Petal won the 2012 local legend Spiritual Writing Competition. Both are set in China, his wife being Chinese. His young adult novel, The Kelpie’s Eyes, winner of the Georgina Hawtrey-Woore 2018 Young adult novel Prize, was inspired by Scottish mythology whereas his play, Give the Dog a Bone, which won the 2018 Segora International One Act Play Competition, and recently staged in the Borders, deals with historical child abuse. For seven years running, his short stories won the Wilfred Hopkins Prize for Creative Writing. Although not confined to any particular genre, he feels drawn to fantasy when writing for younger readers and to the magical realism of many contemporary adult writers. Together with his wife, he has led writing workshops for children in the Borders, Perthshire, London, USA and Thailand, as well as drama writing workshops for senior high school students.