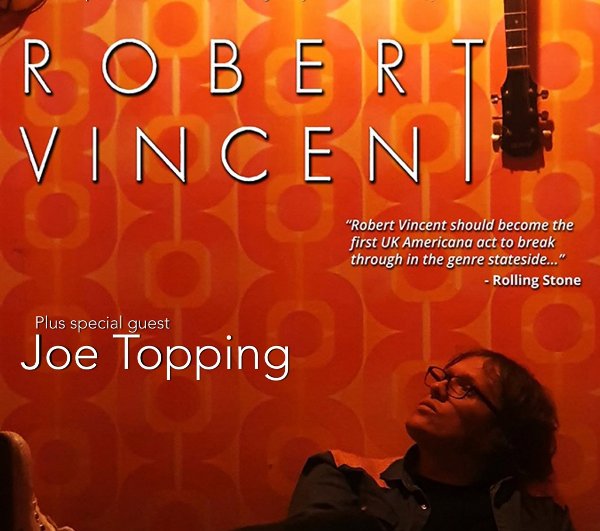 ROBERT VINCENT is an award-winning singer/songwriter from Liverpool – having received the inaugural Emerging Artist Award from “Whispering” Bob Harris in 2016 and UK Americana Music Association’s UK Album of The Year in 2018. Vincent credits his story-telling style of songwriting to his upbringing – where his formative years were spent listening to his father’s record collection including Emmylou Harris, Charlie Rich and Waylon Jennings, plus his older brother’s introduction to Pink Floyd.

Robert hit the road in the Spring for Hearts of Glass Tour supporting Grammy nominated singer/songwriter Beth Nielsen Chapman and closed the show with his performance on The Old Grey Whistle Test: For One Night Only on BBC4. This Summer, he’s been on the supporting bill for his hero Roger Waters in Hyde Park at British Summer Time and will join “The Titan of Twang” Duane Eddy across UK on his 80th birthday tour in October.
JOE TOPPING is a singer-songwriter who has been described as a “cross between Ry Cooder, Woody Guthrie and Paul Brady”. Joe has developed his own unique bottleneck guitar style which he employs in many of his original songs and has a voice that can move from velvet soft to steely and powerful.