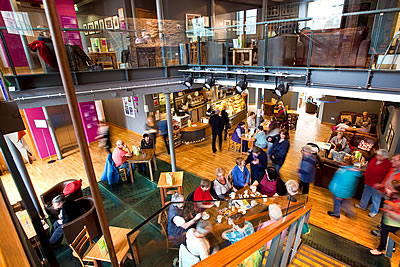 An 108 seat auditorium screens quality crowd-pleasers and family films,
foreign language and arthouse showings as well as broadcasts of the latest
productions from the National Theatre, Royal Shakespeare Company and Royal Opera House. We also host some wonderful performances with live music every Monday and a theatre programme throughout the year. 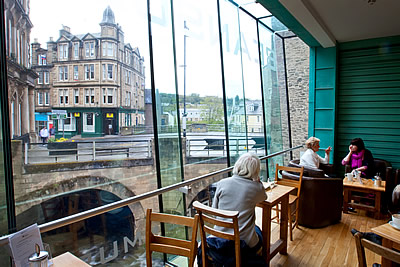 Heart of Hawick started working with Firebrand in 2012 and co-produced a touring production of Iron by Rona Munro in the autumn of that year, starring Blythe Duff. Creating and producing new work at Heart of Hawick, transferring to The Traverse Theatre in Edinburgh and The Tron Theatre in Glasgow and then touring was a first for the Scottish Borders. The tour generated widespread national media coverage and also provided opportunities for mentoring and on-the-job training of producing, stage management and technical skills sets. Blythe Duff won the 2012-13 Critics’ Awards for Theatre in Scotland Best Female Performance, described by Joyce McMillan of The Scotsman as “world class”. HoH has continued to work with Firebrand, producing high quality award winning drama year on year.

Alchemy is a partnership between Heart of Hawick and Alchemy Film & Arts. There were over 750 film submissions in 2014, three-quarters of which were from abroad. The festival attracted 53 visiting filmmakers from the USA, France, Netherlands, Switzerland, Sweden, Croatia, Hungary and the UK. 32 volunteers contributed their time in a variety of roles: invigilation of film installations, drivers, photographers, hosting of visiting filmmakers, Screening Room technicians and information guides. Backgrounds and experience ranged from High School and Undergraduate Students to retired individuals with past experience in the arts.